Joonho ‘JK’ Kim was born in Seoul, South Korea. He came to the United States with his beautiful wife Karen and infant child Michelle in 1981. Prior to coming to the States, he graduated from a fine arts college in Korea and has a BA degree. After he came to America, he worked for a Yellow Pages publishing company as a graphic designer for 21 years.

In 1987, JK’s friend led him to Christ. Until then, he thought that he was good enough to go to heaven, as if God owed him anything. In his own words, he was an arrogant and ignorant sinner. When the Lord showed him that he was nothing without Him, JK broke down and received Christ into his heart.

JK firmly believes that the Lord wants all of us to have uncompromising and practical verse by verse biblical instructions from His Word. And that is exactly how he teaches in Calvary Chapel of Sahuarita. He is straight forward, NOT politically correct, nor has he ever cared to be. But he does very much care to be godly correct. 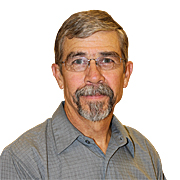 Merrill Simon and his wife, Cindy, have attended Calvary Chapel of Sahuarita since 2003. Both accepted Jesus Christ as their Lord and Savior during their teen years; consequently, they both felt God leading them to work with youth.

Prior to Calvary Chapel of Sahuarita he served seven years in junior high and high school youth ministry at another church. Upon their arrival at our church and during his years here, Pastor Merrill and Cindy served in a variety of ministries including teaching youth, serving on the Mover and Shakers Team when we were renting facilities, completing work with the church building team, and leading Marriage Enrichment classes. Pastor Merrill and his wife Cindy have served continuously in the youth ministry.

Pastor Merrill was ordained as an Assistant Pastor at our church in 2010. He holds an Associate’s Degree from Pima College and has completed a number of courses through Golden Gate Theological Seminary towards a Masters of Divinity. He recently retired as a Wildland Fire Crew Boss from the State of Arizona, and is currently employed with Rancho Sahuarita Management Corp.

He and his wife have been married for over 24 years. They are blessed with four adult children, and 12 grandchildren.